I am big fan of train rides, I find they give me a better understanding of the culture and I get to know the country I am travelling through in a unique way. There is so much to see and observe, not only outside, but on the train itself as well. So when we were given a train ride on the luxurious Belmond Eastern & Oriental Express from Singapore to Bangkok as a wedding gift, I was really really excited.

Even though this was not technically our honeymoon (we were married for six months only at this stage, so I thought this may as well count as a honeymoon), we stated that it was in the sheet they sent us to fill out after the booking was confirmed (where one has to state dietary requirements and all sorts of other information to have the train staff prepared for all eventualities). After planning all sorts of honeymoons and requesting special honeymooner treatments to hotels for my lovely clients, I thought that now my time had come. And, it really worked – after checking into our cosy cabin, we were served a delicious bottle of Champagne together with a lovely card as a special courtesy for us newly-weds. It wasn’t that big of a surprise though, we were travelling on a Belmond train after all…

But let me start from the beginning:

After a few days in Singapore (my German self loves this city: everything is so organized and clean), we were ready for our adventure: 3 days, 2 nights and more than 2000 km on the Eastern & Oriental Express. Check-in was organized at the prestigious Raffles Hotel and were served, of course, a Singapore Sling…Let’s face it: it doesn’t taste very good, but it is certainly an experience and one simply can’t go to Singapore without having a Singapore Sling at the Raffles (Side note: In this moment I did regret the fact that this drink broke the bank during my last stay in Singapore when I was a student and backpacking and thought that I would only once in my life get to have this). This was also the moment when we first got an idea of how well nourished we would leave the train three days later. The cocktails were served with all sorts of delicacies, so we wouldn’t get bored during the check-in procedure. After a 45 minutes drive to the Woodlands Train checkpoint (which was also a city tour with a guide who told us interesting fun facts about Singapore), we went through the immigration procedure and could finally board the train and settle into our cosy cabin which included a tiny but elegant bathroom. We had a State Cabin which is the second category, and I wouldn’t recommend to go lower than that. I saw a few of the Pullman Cabins (entry level) and I’d say you only can book these if you really love the one you are travelling with…

Afternoon tea was served by our personal butler, and after a cup of coffee and a few of the delicious pastries, I felt fully and truly ready to embark on this journey.

I loved how smart the layout of our cabins was. Even though we didn’t have much space, we had everything we needed, and the shower pressure was better than in a lot of hotels I had stayed before.

The above picture shows our cabin during day time, and this is what it looked like when we came back from the dining carriage after dinner:

The meals were an experience on their own. Lunches and dinners were served in the dining carriage where the French chef himself greeted the guests and where all extra wishes were fulfilled without hesitation (I admit, I am one of these annoying passengers with ‘dietary requirements’). The service was amazing, for example, the waiters asked us at the first dinner if we preferred sparkling or still water, and we were never asked again but were always served what we had said that one time  – they must have written this down somewhere. I especially loved this part as I am a big fan of fizzy water and it is kind of hard to get in Asia.

Simon didn’t think of packing a tie but we read in the information sheet that men should wear them during dinners… No problem either, our lovely assistant had tons of ties to choose from for Simon to choose.

Guests are assigned a different table each time and may be seated with fellow passengers, but Simon and I always got a table to ourselves – I assume the staff was conscious of our privacy given the fact that this was our honeymoon, and didn’t want to usk us to share a table (which we wouldn’t have minded as during these three days we sort of ran out of things to talk about – there really is limited space to move around).

Breakfast was served in our cabin and was one of my highlights, I just loved the looks of the silverware and feeling all fancy sipping my morning coffee while passing rural villages and gleaming pagodas…

We spent quite some time in the semi open-air and colonial-style, teakwood Observation Car, located at the rear of the train. We chatted with other passengers and observed the passing countryside. The scenery is exotic, different, breath-taking. However, it doesn’t change that much, so do make sure you bring a good book as well.

On Day 2 after breakfast, the Train Manager Valentin (his French accent perfectly complemented the ambiance) invited us to join the first sightseeing stop in Kuala Kangsar, a Malaysian royal city and the birthplace of Malaysia’s rubber industry. Colonial buildings and the gold-topped grand Ubudiah Mosque are the highlights here.

Sightseeing was quite well organized, even though some might have felt a bit herded around in those big tour buses. Simon and I didn’t think that this city was that spectacular, but it was nice to get off the train for a bit and interesting to see the striking differences between the Muslim country Malaysia and its neighbours Thailand and Singapore. After getting back onto the train we enjoyed another spectacular lunch and then spent the rest of the day lazing around in our cabin. We were warned that it would get a lot more bumpy once we crossed the border to Thailand and it was indeed the case. I did like the landscape in Thailand better though. We passed dazzling pagodas and tropical rural villages where children came running to wave at us.

Even though the beds are as comfortable as they can be on a train, don’t expect a good night’s sleep (a few more cocktails might have helped), it really is bumpy and the train doesn’t stop during the nights. It doesn’t matter too much though as there is plenty of time to laze around and have some naps during the day time.

The river is actually not the river Kwai, but nevertheless, it was spectacular. The sightseeing tour here included a short boat ride underneath the bridge and a visit of the War Museum and cemetery. I personally find the history about the Burma-Thailand Railway built by prisoners of war very interesting, but it might not be everyone’s thing. Back on board, we enjoyed our last lunch and had a few more hours in our cabin until we reached Bangkok’s Hua Lamphong station where the trip ended.

I definitely recommend this once-in-a-lifetime experience and can’t think of a more fabulous way to see these three countries within three days. It just is something completely different and a unique way to travel. However, I do think that two nights are more than enough, as the whole experience is not really a relaxing one. That being said, the train ride from Bangkok to Singapore lasts three nights and includes an additional stop in Penang, Malaysia – something I would have enjoyed. Do bring a book though and don’t do it while you are on a diet.

If you are interested in travelling on the Eastern & Oriental Express, send me or Marbree (our Malaysia Expert) an email at eva@fleewinter.com / marbree@fleewinter.com or give us a call on (UK) 0207 112 0019.

Thanks for reading,
Love, x Eva 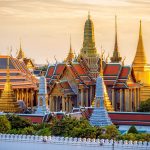 The best boutique hotels in BangkokHotels, Inspiration, Reviews, Sleep, Thailand, The Best Of...