“There is no way you are on a train,” my friend text back after I sent him a video of me bouncing around in my seat as the train rattled and rolled through the Burmese countryside. But yes, it was true, I was indeed on a train – not in a rickety old tuk-tuk on a dirt track as I think he suspected. What’s more I was on the best train ride in Myanmar (Burma).

The age-old phrase about it not being the destination that matters but the journey comes to mind when one thinks about the railway system in Myanmar. The trains take longer than almost any other mode of transport (I say almost because I haven’t put elephants to the test); they are bumpy, they are rocky and they are, quite simply, amazing!

Imagine a train that cuts through the most scenic and idyllic, untainted countryside – but it’s going so slowly that you can hang your head of the window like a dog (plenty of time to remove your head if you see a rogue branch or bush heading your way) and take perfect photos and almost feel like a fly on the wall as you observe local rural life without having to awkwardly intrude. It is simply brilliant. And, as I explained to Matty (my partner who was keeping me company for this part of the trip), much better than trekking in 35 degrees heat. Quite simply, taking a train in Myanmar is basically like trekking for lazy people.

We boarded the train from Hsipaw (a delightful rural town four hours of Mandalay – more on this later) and were heading to Pyin oo Lwin – but were warned the train may be late. Our amazing guide called round at our hotel to warn us of a four hour delay, which didn’t actually affect our day too much as the train ride was all we had planned.

You see we were taking this route specifically because it travels over a particularly jaw-dropping viaduct which goes over the vast and densely forested Gokteik Gorge. At 318ft high, 2257ft across, the Gokteik Viaduct was the second highest in the world when it was constructed in 1901 – and being something of a self-confessed train geek, I was excited to see it.

We finally boarded the train after buying some freshly-fried-on-the-platform samosas and a steamed bread bun of sorts with a tasty chicken concoction inside. Travelling in “upper class” (tickets costing a couple of pounds) the main took us into a carriage with large arm chair style seats (that proved to be quite comfy) he flicked a lever of some sorts and our seats were flipped around to face the direction the train was travelling in. Genius. And so the journey began.

We sat back in our armchairs but were soon back on our feet, cameras in hand, hanging out of the large windows as we passed through some of the most beautiful and unspoilt countryside we had seen yet.

Now, let’s be honest, this is not a luxury train – perhaps an unusual post for a luxury travel blog – but I have always maintained that I love to get off the beaten track and get my hand’s dirty but then it’s nice to check into a smart and luxurious boutique hotel for that all important rain shower at the end of the day. And ladies and gents, you will get dirty on this train. The huge windows are wide open, allowing not only for the most stunning panoramic as you roll on by, but also for all sorts of flies, bugs, leafs and other matter to fly into your carriage. The floor was filthy, we were soon filthy and the toilet – well, that was a whole other matter. Let’s just say you’ll want some anti-bacterial dry soap to hand!

It is not clear how much maintenance is carried out on the Myanmar rail system, which was built in colonial times, which might explain the bumping and the bouncing. I’m not sure I’ve ever jumped around so much on a train before. But I never felt afraid, we were going to slow for that. In fact this was the one time where I thought I might even have been capable of a James Bond roll out of a moving train… and for any of you who know me, that’s saying something.

After a couple of hours we reached the moment we had been waiting for. The Gokteik Viaduct. As we made our approach I did feel giddy for a minute, we were so high! And the thick, forested gorge seemed so far below us. We slowed to a crawl as the train tentatively put her nose on the viaduct, as if testing the weight, building up the courage to put the rest of her carriages on. And then we slowly edged our way onto the viaduct, which I think may have groaned or screeched once or twice in protest. It was simply fabulous, and once again, thanks to the crawling and slow nature of the train we were able to enjoy every moment of it and get all the pictures we’d hoped for.

Going over the Gokteik Viaduct, Myanmar

So, if you are planning a trip to Myanmar (Burma) then I would strongly encourage you to take a train ride – shortly I will be blogging about my top train rides in Myanmar to give you an idea of other options. This journey was about seven hours – but you can take much shorter journeys to get a taste of it, without getting quite as dirty as we emerged that evening.

But seriously, I can’t think of a more fabulous way to see the best of Myanmar’s countryside (most of which is off limits to tourists and don’t have licensed hotels), whilst meeting local people (take some photos of your family from home to act as an ice breaker) and just enjoying something completely different. Enjoy!

PS For more details about booking a holiday in Myanmar please contact me via my contact page (in the ‘about’ menu) or take a look at my travel agency site Fleewinter – which will soon be selling luxury holidays to Myanmar. 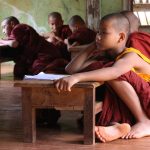 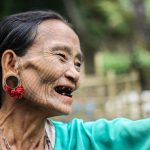