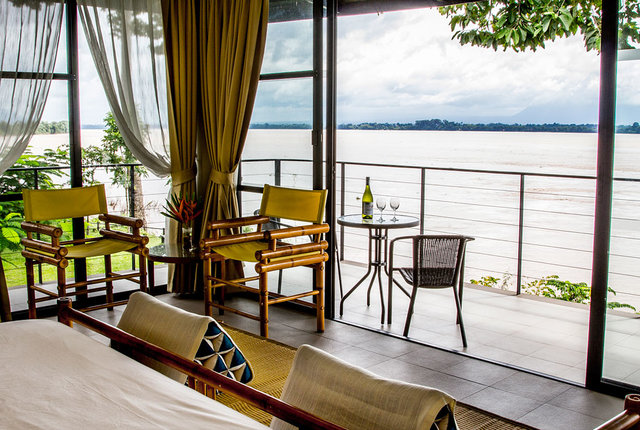 Southern Laos and the incredible 4,000 Islands are often renowned for being something of a backpacker’s paradise so it was with some trepidation that I set off to investigate the area in search of a touch of luxury.

But as we pulled into the River Resort, near Champasak (just half an hour drive from Pakse which is the gateway of South Laos) I felt the pressures of my challenge to find a south Laos luxury hotel alleviate a little. 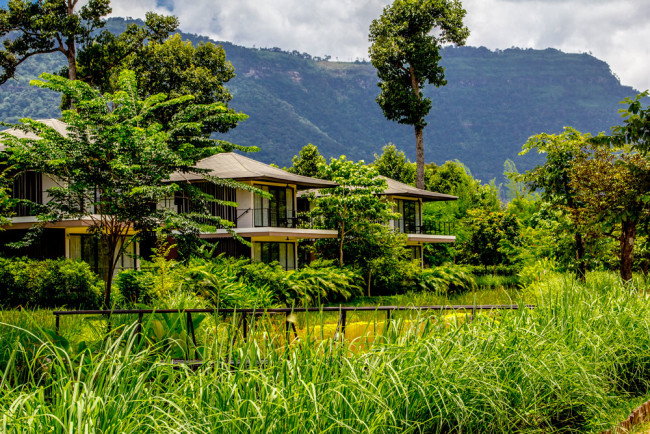 “Oooh it’s a big rice paddy,” I cried in excitement to my mum (who has joined me on this little research trip) as we pulled into the driveway. And I love a good rice paddy (as many of you will know from my previous Vietnam adventures). Sure enough when you pull into the River Resort all you can really see is the rice paddy, with a stand alone wooden reception desk.

“Your room is down there,” said the very lovely man on reception pointing down a path way that cut right through the rice paddy. Our bags were promptly hoisted up and carried towards our room and we happily trotted behind, soaking up the lush greenery of the rice around us. As we made our way to the riverfront, where the rooms are located we were shown the pretty, terrace-style restaurant on stilts and were told there were two swimming pools either side. 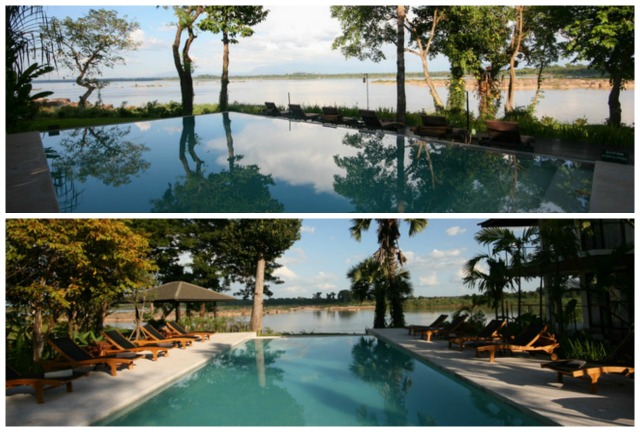 The two swimming pools at the River Resort… the only challenge was deciding which one to flop besides.

Quickly doing the maths, I realised two swimming pools for a hotel with just 28 rooms would surely guarantee everyone a sun bed at all times. I felt my excitable rice-paddy joy step up a notch.

Passing the swimming pools with a look of longing I made a mental note to change into my bikini in the shortest amount of time possible as we continued towards our riverfront room. The rooms are really two-story detached villas that line the river bed (22 rooms are on the river and 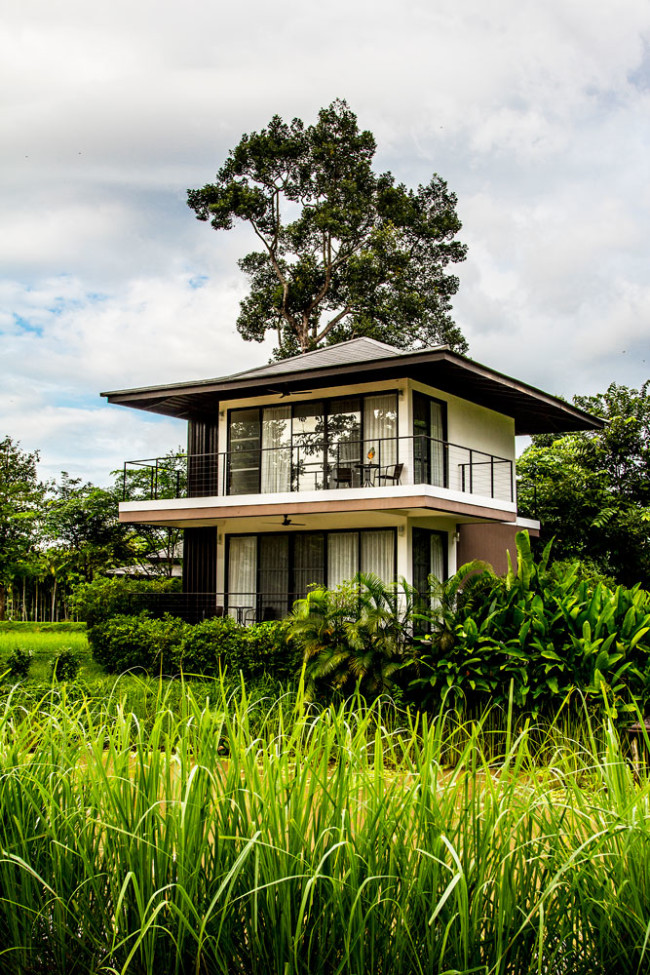 just 6 are set further back in the resort) – and each has a downstairs room and upstairs room with totally private entrances and verandahs or balconies offering superb river views (and sunrise views if you can bring yourself to set the early alarm).

As we reached our room I could hear my mother sighing with relief (I don’t think that she had really believed I wasn’t just taking her backpacking). The room had glorious floor to ceiling doors made entirely of glass that offered phenomenal river views. Stepping inside, we were delighted to find ample space and thoughtful design, above the bed clever wooden shutters separate the ‘bedroom’ from the dressing area – where there was plenty of room for even the largest of suitcases as well as a double sink and wardrobe area. While my mother was grinning in glee at the double sink and kettle (“Oooh, you can keep your mess to your side and I’ll have a cuppa”) I was delighted to find there was not just one shower but two… an inside shower and an outside shower. Lush! 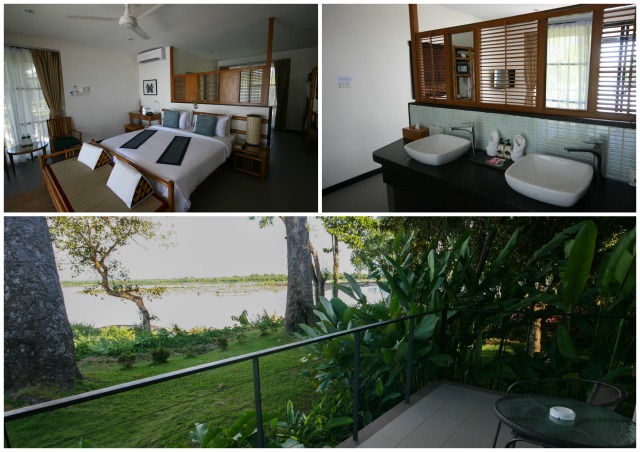 Our bedroom and balcony

But there was no time to sit and stroke sinks or gush about double showers, for we had some important business to attend to. We were taking a sunset cruise on the Mekong River, and before that I needed to sample both pools. Who says travel consultants don’t have full, busy and strenuous days, eh?

I had heard about the legendary sunset cruises at the River Resort before I had even stepped foot on the plane to South Laos. But what I did not know is that we would be sailing on a raft attached to two long boats with a thatched roof… accompanied by wine and canopes! 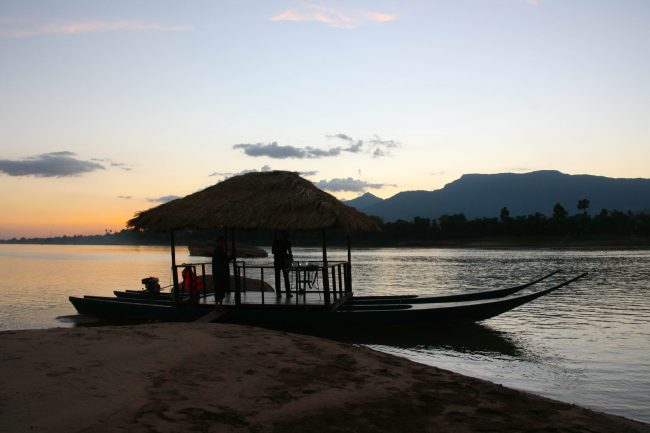 This, ladies and gentlemen, would be my sunset chariot.

Joined by David, an American who left the bright lights of Hollywood for the sleepy sunsets of Laos – and the owner of the River Resort, we set off at about 4.30pm on our river raft delight. Within moments of being on board the wine was poured and the sun began to sink lower in the sky.

But the show had just begun. With a couple of lovely waiters on board (the level of service and English spoken at this resort is almost incomparable to anything else I have experienced in Laos), and a couple of hardy boat men (that were not afraid to get their legs wet), we slowly drifted out into the middle of the Mekong, which is exceptionally wide here.

The motor was turned off as we drifted in the river, while the boat men expertly used their paddles to ensure we were facing the sinking sun at all times… it was showdown! 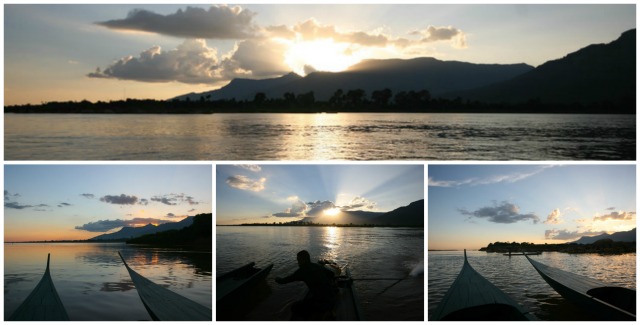 Just before the sky turned into a riot of colours, the motor was turned on and I realised we were heading to a sandy island in the middle of the river. As we made our approach, the engine was turned off and a plank was put down to lead us onto the sandy bank.

“A wedding was held here earlier this year,” explained David as we walked down the wooden plank with bare feet to feel the warm sand on our toes. I could hardly imagine how special that wedding must have been. The small island was a mix of hilly sand dunes and lush greenery, surrounded by the mighty Mekong.

Whilst we were gushing about this magical wedding destination in the middle of a river in South Laos, the boat men lifted the table and chairs off the boat and onto the island, re-arranging everything (from wine and canopes to even my camera lens and lip balm) onto the table exactly as we had left it in the boat. As we sunk down into the chairs on sand, we watched the final show of the sinking sun, that was not to disappoint.

As the sun-kissed sky turned darker it was time to board our river raft for the final time to make the short crossing back over the River Resort, which I had almost forgotten was so close.

That evening we tucked into some of the most delicious and tender fish of the trip yet, marvelling at just how special the sunset had been. And just when I didn’t think the night could improve I was handed a chocolate fondant that oozed in the centre and actually tasted of chocolate (a rare and magical thing in Asia). So yes, in conclusion, I think it is fair to say South Laos is not just for backpackers, and as I bit into my chocolate delight I declared ‘Mission Complete’… I had found my south Laos luxury hotel and it oozed style. Even Mother agreed.

PS If you would like to book a room at River Resort it costs £120 for a river front room in the high season… to book please contact me. If you would like to talk to me about arranging a holiday or honeymoon for you in Laos please do get in touch… you can also checkout some of the itineraries we have in south-east Asia at my boutique London-based travel agency. 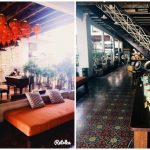 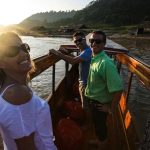